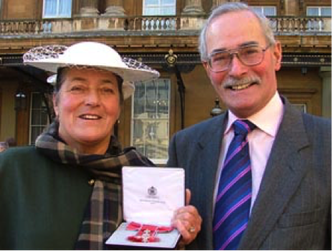 Kath receiving her MBE
Kath received her MBE in the Queen’s Birthday Honours List for her Services to Netball on 26 October 2004 at Buckingham Palace.

Kath, contributed to the world of netball for over 50 years. Her commitment and dedication to Netball ranged from School to Club to National level.

Kath was involved in all aspects from playing, to umpiring, coaching and administration, Kath continued to be very active, despite her illness, right up until her passing on Friday 24th October.

Kath founded, in 1972, and managed, the Dacorum Netball Local Coaching Centre on behalf of the Herts Sports Partnership through Shelley Netball Club.

Kath has been Treasurer for the Watford Netball League since initially establishing the league in 1974.

Kath’s primary role was always in umpiring even though she was an experienced and successful coach. She had been a National Panel Umpire since 1972, and although no longer active at this level, Herts County Umpiring Secretary since 1973 and East Region Umpiring Secretary since 1975. Kath trained, tested and assessed umpires up to a National Level and her pilot scheme of mentoring umpires was adopted nationally. Kath also implemented High Five Netball for primary school children, boys and girls, across Hertfordshire.

Faye Parsons, a Level 2 coach, said at the time “Kath has the drive to achieve at everything she does. Then, when she succeeds, she turns round and helps others reach their potential”. Others have said she was tireless in her support of netball through all age groups and communities, as well as being instrumental in the setting up of many new netball projects.

Kath somehow found time and energy to be a wife, mother, grandmother and animal minder, her other passions being horses and dogs.

The world of netball will miss Kath.